Get ready for a new challenge! Abyssal Claw, the 1372th server for League of Angels, will open on Dec. 21st at 1:00PM GMT! With more than 20 hot new server events and a ton of amazing prizes & gift packs, you better act fast to score all the sweet, sweet goodies! 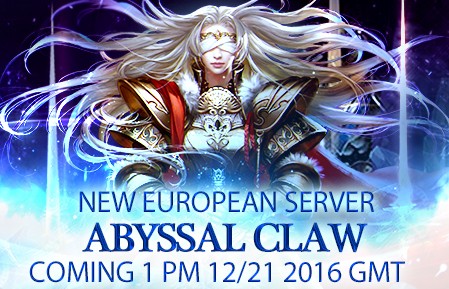 The Abyssal Claw server will be based in Greenwich Mean Time (GMT), and feature all your favorite Events and features including Team Dungeons, Team Arena, PvE Dungeons, Guardian Angel, Hero & Mount Upgrade, Raiders, Cross-server War plus the brand new Angel Evolution and Hero Elemental Training! Get ready to join and save the world from the forces of evil!

From 12/07/2016 onward, League of Angels will bring you new servers based in different time zones (including GMT, PST and EST) every Wednesday. Get ready, brave warriors!


Vanquish evil and defend justice! Be sure to keep an eye our Facebook Fan page and in game events! We hope LoA players will enjoy the new server and explore new ways to play the game!


About League of Angels
League of Angels is a free MMORPG featuring intense combat and beautiful visuals, making it one of the best online games in its genre and awarded “Best Browser MMO of 2015”.

Last: The New Round of Volatile Battlefields: Be the Conqueror!

Next: New Oceanic Server Launches for League of Angels!