Today, we are honored to have Burning, a Lv. 76 LOA player from Singapore in the US-East S20 server, who made his way through the Cross-Server Tournament and crowned himself.

Nicky:  Burning, how long have you been playing LOA, and how did you know about this game?
Burning: I started playing this game in the end of Jan, after I saw ads of this game on a website of another game. At that time LOA did not have Oceanic servers thus I had to play in the US-East server.

(Whispers from Nicky: now we have many servers in different time zones. If you notice you are in the wrong time zone when you enter a server, please shift to a new server and we can provide a transfer of VIP level and diamonds.)

Nicky: As a Singaporean in the US-East server, the time difference may make you miss many events, but you still managed to turn your character into a berserker with 2200k BR. How did you deal with the time difference and how many hours do you spend in the game per day?
Burning: I tried my best to log in the game every day, and do all the things I could. I could hardly ever take part in the World Boss and the daily question events, which lead to a lack of coins. I had to use other methods to compensate for this loss.

(Whisper from Nicky: time is money.)

Nicky: In the Cross-Server tournament, did you presume from the beginning that you would rank the top?
Burning: I was not sure about that because I lost in the last tournament.

(Whisper from Nicky: I am quite sure that I have to do every interview...)

Nicky: Do you have any experiences to share with us about your battle skills and your heroes?
Burning: I thought I might replace my Valkyria with a Dark Paladin.

(Whisper from Nicky: Here is the battle array from when Burning won.) 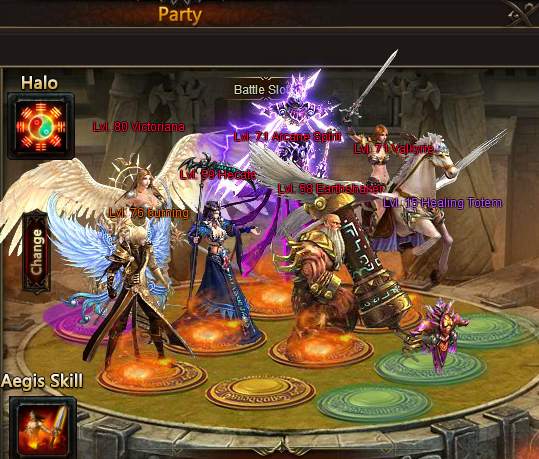 Nicky: During the last 6 months, which battle impressed you most?
Burning: A battle in the last month, as I just mentioned, my enemy was very smart and was able to defeat me with a much lower BR.

(Whisper from Nicky: At that time, Burning’s enemy managed to take down his whole battle party with just Hella and Hero. This left a great impression on many people.)

Nicky: As for your friends and partners in the alliance, do you have anything to tell them?
Burning: Actually I hardly play together with my alliance due to the time difference, but I can meet Juke (my wife) in the game almost everyday!

(Whisper from Nicky: Actually, I hear that Burning’s alliance partners often complain that they cannot understand him due to his poor typing skills! I don’t think he realizes.)

Well then, this interview is now over. Will Burning retain his crown in the new tournament? Let’s wait and see.

Outcome of this Cross-Server Tournament: