In League of Angels, Arena is a feature divided into 3 parts, Solo Arena, Team Arena, and Domination.


Upon entering solo arena, the player is met with 5 opponents; the player may choose to fight the opponents. With a limited amount of attempts per day, players may try to save them to defeat opponents they are sure to beat.

Depending on VIP level, a cooldown may delay the process of defeating opponents.

There is a timer in the center that displays a countdown to when the opponents are refreshed.

Diamonds may be used to refresh opponents immediately. Additional attempts may also be bought with Diamonds.

Arena Emblems are earned by defeating opponents in Arena.

Domination is a tournament that occurs every 4 days. If a player is in the top 8 of their arena in Solo Arena, they are entered into Domination automatically. Otherwise, players must join manually by clicking “Join” on the main screen during the day of the event.


Players may also place wagers on specific battles between combatants in the top 32.
Winners and top ranking players receive gem chests and Warsouls.

The champion also receives the flair title, “Domination Champion”, until the next tournament.


Team Arena is a 3 vs. 3 battle. Each player also chooses 1 hero to fight with them. The team leader may change the positions of the party before entering the queue. Opponents are randomly selected.

Daily Team Arena attempts are limited. More attempts can be purchased with Diamonds. 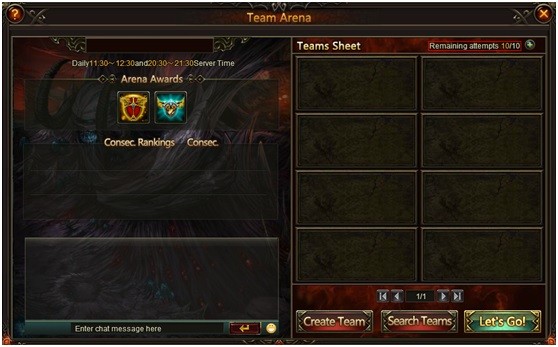 Dragon Crests are earned by defeating opponents in Team Arena.

The Arena Shop has a wide variety of items to choose from.
Crafting prints, skill tomes, and Angels Relics are sold for Arena Emblems.
The Valor Set, Holy Crystals, and mount experience potions are sold for Dragon Crests. 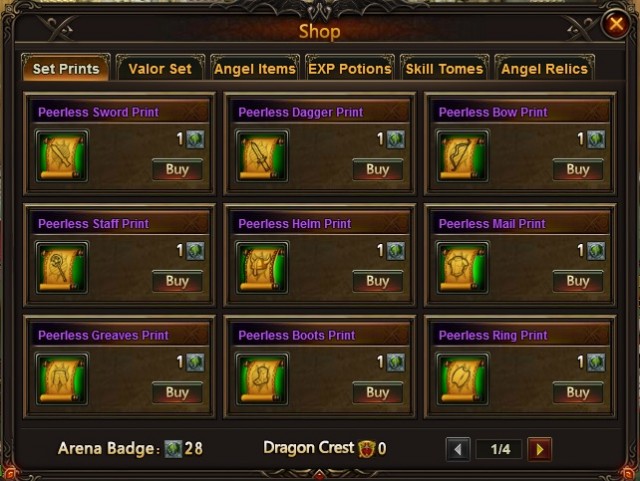