Cross-Server War is a new system that players may join to fight others in different servers.

Once a player enters, they are assigned to a 10 man team based on level and previously accumulated points in Cross-Server War.

The main objective is to collect more points than the other team by collecting the gold ores that spawn pseudorandomly at the designated areas. Players may also gain points for themselves by defeating enemies and assisting teammates; points from these do not contribute to the team’s score.

There are 4 points to collect gold ore. The large deposit is located in the center while the smaller, common ones are around it, separated by bridges. It takes a few seconds to collect gold ore. If you are attacked while performing this action, you will be interrupted and may try again after battle.

Players do not regain health immediately after battle; they only fully recover when revived after being defeated.

There are 3 points on the map where buffs spawn for players to collect. The buffs given will be completely random. The four possible buffs are attack boost, defense boost, speed boost, and 50% max health recovery.

Before entering, players choose a skin. Each skin gives players different skills to use and also changes the appearance of their character. Skins allow players to specialize in attacking, defending, or supporting.

The match is completed when a team reaches 1000 points or when the 30 minute timer runs out. The team with more points will emerge victorious.

When the match is completed, players will receive honor according to their rank among other rewards.

Honor may be used in the honor shop to buy special items such as Flairs, Medals, and Fashion Cores. Medals are equipped to grant extra bonuses in battle. Fashion Cores are use to upgrade costumes and wings. 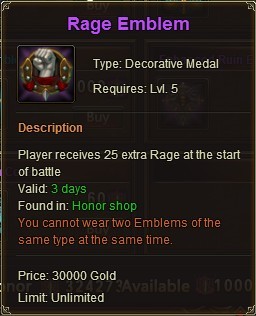