Navigation King
There has been a legend that Atlantis, one of the continent of god, submerged into the ocean in ancient time. For all these years, no one knows where it is. However, in recent years, rumors about its appearing in the East Sea spread among people. It is said that this lost land was full of exotic treasures, and has the legendary fountain of youth which can make people live forever. All of this attracts countless people set off on their adventure. What are you waiting for? Go aboard and sail around this new world, to explore the mystical area and find your treasure!

Click the icon of Navigation king you will see four parts. They are Sail away, Bonus, Emporium, and Rules.

1.player can board a ship once and employ 1 mariner for free each day.
2.Spend any amount of Diamonds to automatically board a ship. Voyage will begin after the countdown finishes.
3.Spend 50 diamonds to employ one mariner immediately. The mariner can find bonus treasure for the player.Different mariners can seek for different treasures. The cost is the same, but the chance to win extra treasure differs. Choose wisely!
Deckhand:        1-star ☆
Skillful Sailor:     2-star ☆☆
Second Officer: 3-star ☆☆☆
Chief Officer:     4-star ☆☆☆☆ 4.A cross-server mariner treasure hunt will also take place during the voyage. 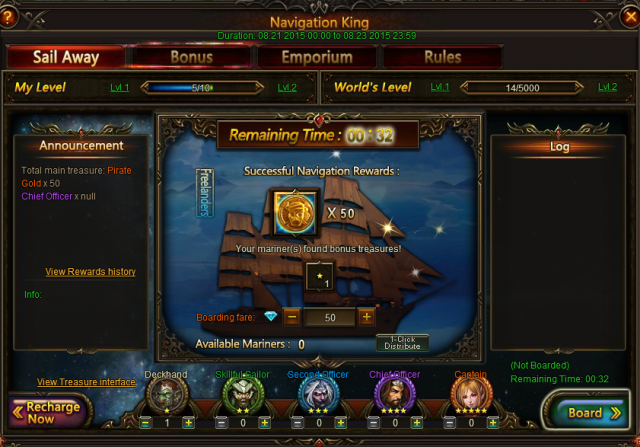 Then you can see this interface. 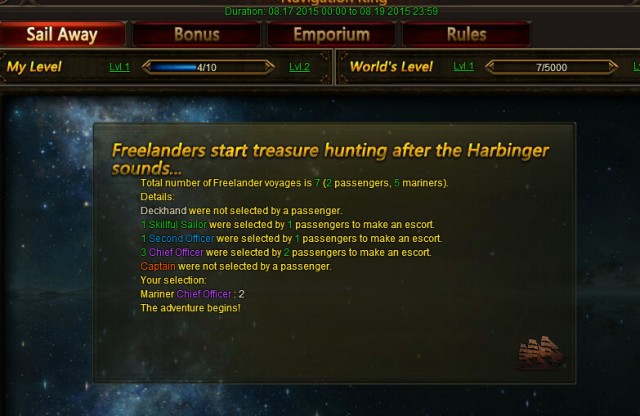 When voyage finished, you will see treasure interface. You can get pirate gold and have chance to get extra treasures.

One diamond is not exactly equal one Pirate Gold. The more Boarding Fare you spent, the more Pirate Gold you will get.

Apart from Pirate Gold, you will also have a chance to get extra rewards. It depends on the strategy and fortune of your choosing mariner. 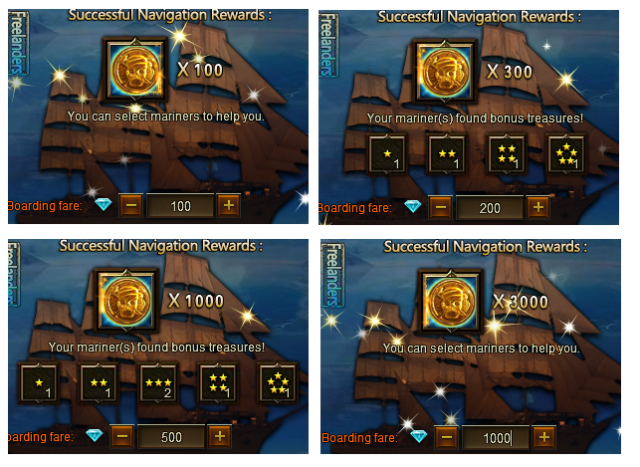 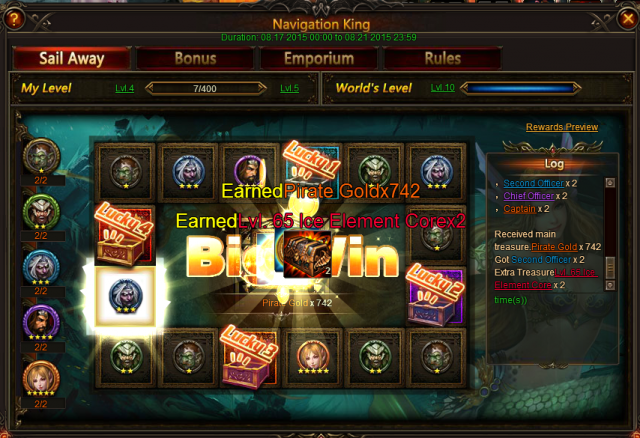 If it stops at this icon, It means it will 100% hitting more than one mariner. 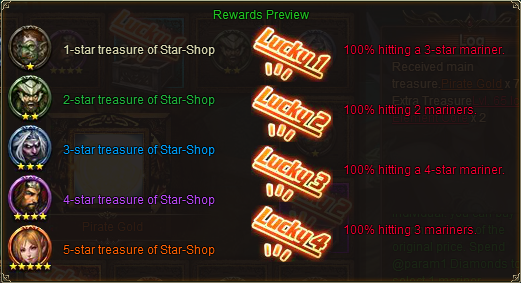 When you got the reward. You will see this interface which you can check the log of this voyage. World's Level means Cross-Server level, so you can get the rewards easier even though your server don't have too much players.

Different from Lucky Tree System, level rewards in Navigation King can be claimed once anytime during the event. 1.There are Individual Perks and Total Benefits(server benefits) in this part. Items in the screenshot may differ from actual in game In Emporium you will see Super-Shop and Star-Shop. You can use pirate gold to buy hot items .

PS: Some items are daily limit and some are event limit.

Daily Limit: you can only buy the items for certain times each day

Event Limit: you can only buy certain items for certain times during the event